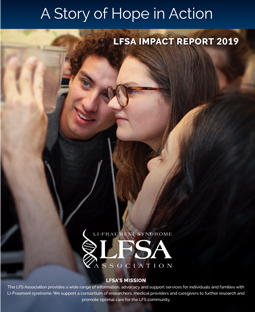 We are closing out another remarkable year for the LFSA and the important work that we do. As we continue to make strides, our global reach continues to expand to touch more lives. I am excited to report that 20 LFS youths from five countries attended the 2nd International LFS Association Youth Workshop with their parents. It was an extraordinary event that offered a truly wonderful opportunity for these individuals to connect with each other and learn and grow in their own journey.

Also this year, more than 30 local community events were held in Canada, Italy, New Zealand, Australia, Germany, Brazil, and across the United States to raise funds and awareness for LFS. Along with chapters now in the Netherlands, Australia/New Zealand, France, Germany, Saudi Arabia, Japan, and Singapore, we have expanded the LFSA chapter in Brazil to include all of Latin America. Both Germany and France have held their second annual LFSA family conference, and the Latin American chapter will be holding their third LFSA family conference in Brazil in 2020.

In other exciting news, we now have 25 genetic counselors dedicated to helping those with LFS working on more than a dozen projects to better serve the LFS community.Our Medical Advisory Board has formed a whole-body MRI (wbMRI) task force that is advocating for wbMRI accessibility for all as part of LFS screening with medical professionals and insurance companies.

I would like to personally thank everyone who has contributed in even the smallest ways to help our organization make a difference in the lives of those bravely fighting back against LFS.

Our global online network is attracting attention and raising awareness.

In August, our biennial LFSA Youth Workshop was held in Boston, MA, hosted by Dana-Farber Cancer Institute and Boston Children’s Hospital. We are proud to report that an unprecedented number of patient family participants were in attendance. During the workshop, we discussed risks, surveillance and management of LFS, as well as healthy lifestyle measures, communications tools, managing transitions, and more. We were honored to have some of the top LFS and TP53 researchers present the latest updates on advancements and the most recent studies available for LFS patient participation. Of the many activities, highlights of the weekend included a DNA Legos project, a tour of the zebrafish lab and a Boston Duck Boat Tour.

““I loved this year’s Workshop! The new developments in both research and biopsies give all of us and everyone else with Li-Fraumeni syndrome hope for the future. While it was short, the time I spent with the teens there gave me a strong feeling of family…”

We remain committed to educating patients, families, and clinicians touched by LFS.

Our “Ask a Genetic Counselor” webinar in the Spring of 2019 gave patients and families the special opportunity to ask questions and get valuable information from the LFS community’s most trusted genetic counselors. The featured topic of this year’s webinar was “Talking with Children About LFS.”

This year we also sponsored “Robot Music: A Story for Kids with Li-Fraumeni Syndrome and other Cancer Predispositions,” a book designed for children aged four and up.

No one with LFS should ever feel alone. We ensure voices are heard.

In 2019, we launched our Voices of LFS Facebook Group. It unites the LFS community and allows members to share their stories and find friendship and support both close to home and around the world. While no medical advice is shared, all members are free to post. Posts include personal stories, new medical breakthroughs, and announcements of exciting new research and community events. The group is closed and moderated by trained LFSA Board Members and volunteers.

On a daily basis, we continue to field phone calls, emails, and Internet queries to help facilitate connections of LFS patient families to the most appropriate LFS providers for their expressed needs.

2019 has seen the continued march of progress toward a better tomorrow for those living with LFS. In August, the LFSA collaborated with the newly formed Li-Fraumeni TP53 Center at Dana-Farber Cancer Institute to host the second LFSA Youth Workshop which was a tremendous success for attending youth and their families. These young ambassadors have helped expand our presence, not only domestically, but also internationally, with multiple new chapters developing in 2019. This has been instrumental in not only increasing collaborative efforts of scientists and providers, but also in connecting LFS patient families with the best care available, globally.

There has been continued international research collaboration with the development and expansion of the LFS Patient database by the City of Hope and the LiFE Consortium. This has led to a remarkable increase in research interest in LFS with new insights into this complex syndrome. It is our hope that these insights will translate into a better understanding of the unique risks each person and family affected with LFS faces, leading to improved screening and outcomes for patients.

As the pace of innovation continues to quicken in cancer research and newer therapies are announced daily, it is our hope that our work at the LFSA, and with the collaboration of all our partners, that we will see translation of these discoveries benefitting all of those living with Li-Fraumeni syndrome. With persistence, as well as with your help and support, we can get there.

One of the LFSA’s missions for 2020 is advocating with both care providers and third-party payers regarding surveillance, for LFSA board members and medical advisors have determined there is sufﬁcient evidence to recommend that, in addition to regular physical exams and other investigations, all patients diagnosed with Li-Fraumeni syndrome receive annual rapid whole-body MRI scans. 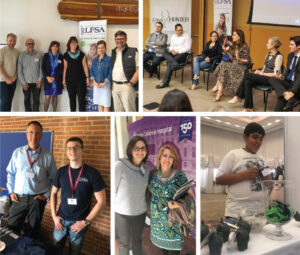 Our global influence flourishes through local, community and industry events.
There are many ways to help the LFSA educate, raise awareness, fundraise, and provide support by engaging new audiences within their communities, at work, in clinical settings, and at home.

Logan Strong, Ohio, US
170 family and friends came together at a Cleveland Indians game to honor the memory of Logan Massey and raise awareness for LFS. The group received special recognition during the game with a warm welcome and an opportunity to raise LFS awareness on the jumbotron.

Tee’d Off at LFS, North Carolina, US
A golf tournament to benefit the LFSA and Kortne Waginger, was held at Reems Creek Golf in Weaverville, NC. It featured a luncheon, dinner and awards banquet. 10% of the funds raised helped finance research and awareness for LFS.

LFSA’s Cow Pie Contest, Massachusetts, US
The LFSA held our first Cow Pie Contest, a fun and unique fundraiser in which each attendee bought a square, and if a cow made a “pie” in the square they purchased, they won an exciting prize. The event was hosted by the Westfield Riding Club and featured lawn games, a home baked real pie contest, and cows from Prospect Valley Farm.

LFSA’s Fall Invitational, Massachusetts, US
Our inspiring gymnastics competition, the LFSA Fall Invitational, expanded this year with more than 200 gymnasts and 14 teams competing. The event is an opportunity to raise awareness about LFS and funds to support the LFSA Youth Program.