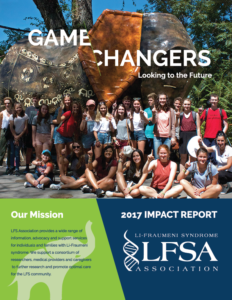 The Li-Fraumeni Syndrome Association (LFSA) supports families and individuals with LFS in ways that touch lives and inspire change. We continue to raise awareness in the community, advance medical and scientific research, and unite patients and professionals who share this same goal. 2016 was our most successful year yet, making a significant impact and reaching several new milestones.

When I look back on the past year and try to think of a way to describe the LFSA’s impact, the phrase that comes to mind is “Game Changer.” Webster’s Dictionary defines game changer as “a newly introduced element or factor that changes an existing situation or activity in a significant way.” The LFSA’s 2017 efforts to support LFS patients and their families, further LFS research, and raise awareness of LFS, have not only significantly changed the lives and futures of LFS patients and families, but also the future of LFS research as we know it.

We hope to show you in this Impact Report just some of the many different ways we’ve worked to inspire change for the LFS community, but I’d like to highlight a couple of achievements I’m quite proud of here:

In 2018, the LFSA will work toward further establishing our global presence. We look forward to holding the 4th International LFS Association Symposium, the only conference of its kind that connects LFS patients and family members, researchers, scientists, and medical professionals from across the globe.
We are also excited to have welcomed five new international chapters in Canada, Brazil, New Zealand, Germany and the
Netherlands in 2017!

On behalf of the LFSA, I want to extend my sincerest gratitude to everyone for their support. The LFSA knows that our accomplishments are all just a testament to the remarkable efforts and generous contributions made by our supporters. Together, in 2018 we will continue to build a brighter future for LFS families.

LFSA Community Events not only raise funds, but also raise awareness of LFS, garner support for the LFSA mission and bring LFS community members together to support one another. In 2017, the LFSA and our supporters held a variety of engaging events – a sampling of them are featured below. We would like to thank all those who held events to support the LFSA, as well as all event attendees, sponsors and donors!

The march of progress has continued in 2017 toward a better tomorrow for those with LFS. Multiple publications in 2017 by LiFE Consortium researchers have highlighted the role of whole-body MRI screening for early detection of cancer in individuals with LFS. Additional exciting work is being done in augmenting this strategy utilizing circulating tumor DNA to detect early genetic signatures of cancer in the blood.

In 2017 there has also been unprecedented international collaboration on the development and expansion of the Li-Fraumeni patient database by The City of Hope and LiFE Consortium. This promises to be one of the most important projects to date in promoting LFS related research and advancing our understanding of the unique risks for each person and family affected with LFS. This LFSA supported research, coupled with the rapid pace of new cancer discoveries in the last year, fills me with optimism for the future. 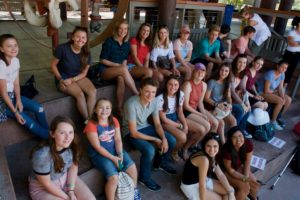 In August, the LFSA held their inaugural Youth Workshop in Salt Lake City, treating 21 teens with LFS from around the world to a weekend of fun and educational activities, and a lifetime of friendships. During the workshop, youth attended Dr. Yelena Wu’s and Dr. Christian Kratz’s presentations on Living with LFS. The weekend also included an educational tour with the elephants at Utah’s Hogle Zoo and hands-on lab work in the same laboratory where groundbreaking LFSA-funded research is conducted.

The LFSA would like to thank Dr. Joshua Schiffman, Dr. Lisa Abegglen, the Huntsman Cancer Institute researchers and staff, and the staff at Utah’s Hogle Zoo for their assistance in making this once-in-a-lifetime opportunity a reality for the LFSA.

“The LFSA Youth Workshop was a complete game changer for both the caregivers and teenagers with LFS. It created new relationships, understanding, motivation, and above all else, the inspiration to continue to focus on adolescents with LFS and to meet their specific needs. An amazing time was had by all!”
– Dr. Joshua Schiffman, MD, LFS Doctor & Researcher

LFSA Community Events not only raise funds, but also raise awareness of LFS, garner support for the LFSA mission and bring LFS community members together to support one another. In 2017, the LFSA and our supporters held a variety of engaging events – a sampling of them are featured below. We would like to thank all those who held events to support the LFSA, as well as all event attendees, sponsors and donors! 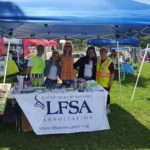 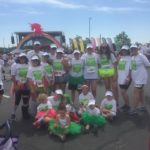 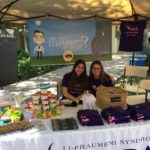 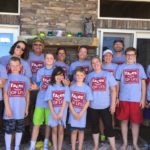 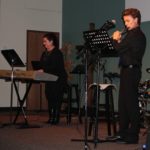 ‘MO SONGS FOR KERRY’
On July 29th, Kathy and Jaime Higgins held the 4th Annual Mo Songs for Kerry Fundraiser, a celebration of life in memory of their two daughters, Maureen and Kerry. The event was bigger than ever, and featured local bands, a craft show, carnival games for kids, BBQ and other fun activities for families! Event proceeds were used to pay for life-saving MRIs for children with LFS and to send children with LFS to summer camp.

Noelle’s Triathlon
LFS fighter Noelle Johnson and her inspirational LFS Fight Club of family and friends returned to complete their 3rd consecutive triathlon to fundraise for the LFSA.

Fran-tastic Baths and Barks
In April, with help from Tag Nutrition and in collaboration with Kids Boost, young LFSA supporters, Jordan and Mackenzi, washed dogs to raise funds for the LFSA.

Carly’s Marathon
When Carly isn’t working as a genetic counselor at Mass General she is raising awareness and funds for the LFSA! On October 8th, Carly Grant completed the Mohawk Hudson River Marathon to raise money for the LFSA.

Kathy and Stephanie’s Color Run
Kathy Demko, Stephanie Kudriashova and more than 20 of their family members and friends represented the LFS community as Team Faces of LFS in the Color Run, a festive paint race that celebrates health, happiness and individuality.

Layna and Rebecca’s Bake Sale
In August, two shining stars of the “Team Sea of Hope” raised funds for the LFSA with a bake sale! Layna and Rebecca, the sweet grandchildren of Kathy Demko, donated the proceeds to the LFSA in honor of Kathy’s niece, Sarah, who is thriving, in spite of her LFS and past cancer.

Elijah’s Concert
One of LFSA’s young heroes, Elijah Johnson, jumped right in to fundraise for Salute! and raise LFS awareness by holding a concert at his church where he performed. During intermission, his parents engaged in conversations about LFS, the LFSA, and the research we fund!

Salute! Hartford 2017 Gala
Friends of the LFSA gathered to support patients and families living with LFS on September 28, 2017, at The Society Room in Hartford, CT, for LFSA’s Salute! Hartford 2017 Gala, a Gatsby-inspired evening of cocktails, appetizers, a raffle and more! Proceeds from the event were used to fund research initiatives dedicated to improving and prolonging the lives of LFS patients worldwide.

Raising awareness of LFS and advocating for the remarkable families and individuals affected by LFS are vital to the LFSA’s mission of furthering research and promoting optimal care for the LFS community. In 2017, the LFSA established five new international offices and attended numerous events to make meaningful connections and spread the word about LFS around the world.

In February, the LFSA exhibited at Rare Disease Day at the National Institutes of Health in Bethesda, MD, and attended Rare Disease Week on US Capitol Hill with Rare Disease Legislative Action. During the week, LFSA Board Members, Holly and Kathy, attended the Rare Disease Congressional Caucus meeting with US Senators and Representatives to discuss LFS patients’legislative needs.

In April, LFSA Volunteer Margie Fernandez and Holly Fraumeni attended the American Association of Cancer Research Annual Meeting in Washington D.C. and spoke with LFS researchers attending the conference about the significance of the discovery of LFS, and its role throughout p53 and cancer research.

In September, LFSA volunteer board member, Kathy Higgins, exhibited on behalf of the LFSA at The National Society of Genetic Counselors Annual Conference in Columbus, Ohio. During the event, she spoke to genetic counselors and other professionals about the needs of LFS patients.

In September, LFSA Canadian Chapter Chair ChiquitaHessels exhibited on behalf of the LFSA and presented at aspecial session at The Canadian Association of GeneticCounsellors Annual Education Conference in Victoria, BC.

In November, Medical Director Rob Lufkin and Holly Fraumeni attended The Society of Neuro-Oncology’s Annual Meeting in San Francisco, CA, and exhibited on behalf of the LFSA.