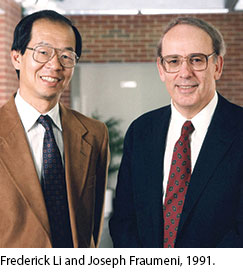 We are families, like you who have been devastated by the effects of Li-Fraumeni Syndrome (LFS), a hereditary genetic cancer predisposition syndrome. Our hopes are to educate, raise awareness, and find better screening programs and treatments for LFS. By forming relationships with and supporting the variety of researchers and medical staff who can help achieve this, we wish to help provide a better understanding of a complex syndrome to those who need it. We welcome communication with all professionals, researchers, scientists, doctors, patients, and families in the hopes that the bridges formed by these communities will lead to an end of the devastating effects of Li-Fraumeni and other Li-Fraumeni-like syndromes.

In November 2010, with the support of the United States’ National Institute of Health (NIH) and the world’s medical leaders of the Li-Fraumeni Syndrome, we all met in Washington D.C. at the first Li-Fraumeni Syndrome Conference. One month later, in December 2010, we officially formed the LFS Association and selected our inaugural Board of Directors.

Uncovering the Causes of Cancer in the Division of Cancer Epidemiology and Genetics (DCEG) at the National Cancer Institute: Watch DCEG Director Dr. Stephen Chanock discuss the visionary work of Drs. Joseph Fraumeni, Robert Hoover, and Margaret Tucker as the first generation of researchers at NCI to focus on the etiology of cancer and the environmental, lifestyle, and genetic influences on cancer. Also featured is Dr. Maria Achatz, the principal investigator of the LFS study at NCI, discussing the early discovery of LFS and the significance of LFS research in  carcinogenesis, in general. (October 2017)

Learn More About the Next Generation of LFS Researchers

Learn more about the disease: