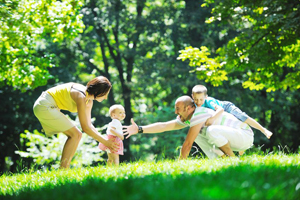 Li-Fraumeni syndrome is caused by an inherited (germline) pathogenic variant of the TP53 tumor suppressor gene on chromosome 17. LFS was first recognized in 1969, and in 1979, TP53 was identified in the tumor tissue of more than 50% of all cancer patients. However, it wasn’t until 1990 that a TP53 germline variant was discovered to be the cause of LFS.

LFS follows autosomal dominant inheritance. Most genetic diseases are determined by the status of the two copies of a gene, one received from the father and one from the mother. Dominant genetic disorders occur when only a single copy of an altered gene is necessary to cause a particular disease. The abnormal gene can be inherited from either parent and can result from a new mutation (gene change) in the affected individual. The risk of passing the altered gene from an affected parent to an offspring is 50% for each pregnancy. The risk is the same for males and females.

Most people with LFS have a germline TP53 gene mutation, but in some individuals, LFS is due to a spontaneous (de novo) genetic variant that occurs in the egg or sperm cell. In such situations, the disorder is not inherited from the parents.

There are many known variations of malfunctioning TP53, and each can affect every person in a family differently. Most families with LFS have very high cancer incidence rates, while some others do not and even within families the aggressiveness of the syndrome varies. The degree to which a TP53 variant causes cancer in a family or individual is called “penetrance.”

Individuals with LFS may also be prone to the carcinogenic risks associated with certain lifestyle or environmental exposures, such as tobacco smoking or radiation exposure. LFS patients should take preventive measures to reduce their exposures to behavioral risk factors and carcinogens.

Learn more about the disease: